RAF looks to the future on Battle of Britain Day 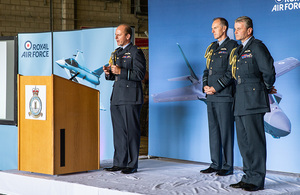 On the 80th anniversary of the Battle of Britain a special day of events was hosted at RAF Waddington, the home of the RAF’s intelligence gathering assets, showcasing how the RAF are ready to meet the challenges of today, and the emerging threats of tomorrow.

To secure Battle of Britain victory, the RAF, working with industry and global allies, drove a battle-winning technological advance at an extraordinary pace. This innovation-drive continues with each generation, as the RAF seeks to maintain the ability to operate in the ever more complex, competed and contested multi-domain operating environment of the future.

Together with the UK’s world-leading aerospace sector, the campaign to build the Next Generation Royal Air Force codenamed ‘ASTRA’ is already underway, which will make a leading-edge contribution to the UK’s place in the world.

As we look to the future, the RAF will continue to be at the forefront of innovation – our enemies and their threats may have changed, but the need to stay ahead of the technological curve remains.

In his speech at RAF Waddington, the home of the RAF’s Intelligence, Surveillance, Target Acquisition and Reconnaissance (ISTAR) fleets, ACM Wigston touched on a variety of innovative projects including:

Following a £65 million investment, the first three of Reaper’s replacement, Protector, are in production to enter service by mid-2024, delivering a step-change in capability for the RAF.

Together with the pioneering industry alliance, Team Tempest, the RAF is developing the next-generation combat aircraft, Tempest, which will deploy new, game-changing technology. Seven new companies have recently collaborated with Team Tempest, and together they will develop ground-breaking concepts and secure the UK’s position as a global leader in combat air.

In response to the changing threats, the RAF has invested in new counter-drone technology, ORCUS, which will be able to detect, track, and defeat hostile drones, which will be vital to protect UK air bases.

Concurrently delivering decisively on operations, whilst preparing for the next, the ACM confirmed that the RAF is always there to deliver air and space power to protect the nation, giving the UK Government choices and options to act on the world stage.